A Better Metric Than ‘Flatten the Curve’

The MSM and some experts are fixated on the ‘Flatten the Curve’ strategy for dealing with the spread of the Wuhan Virus.

Their argument is that by slowing the rate of the spread of the virus we can prevent the health care system from being overwhelmed.  Sounds like a good idea, right?

In support of this claim we are reminded about apocalyptic situations in places like….well, just one region of Italy.  We’ve already examined why the data out of Italy doesn’t support the claim, and now there are rumors that many deaths in Italy are being attributed to Wuhan that may have really been Influenza deaths.  We’ll know for sure when we can look back and compare flu-related deaths from 2019 with the same months in 2020 and compare to other countries during the same time period.

Regardless, the focus on flattening the curve really misses the point; the most important metric is deaths, because while we love physicians and nurses and lament that they are working extra hard and we all want hospitals to have sufficient resources, what we value most in life is, well, life.  (By ‘we’ I mean ‘me’, because I am well aware that the majority of Americans do not value life above other things, like convenience or cost).

Anyway, if you shared my priorities and death was the worst outcome (in a temporal sense), you might want to know how your nation is doing at preventing deaths among the sick, rather than their effectiveness at measuring infections.

If you’re into doom and gloom, you’re going to be disappointed.  We’re doing extremely well. 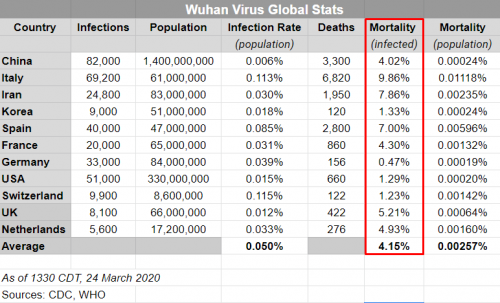 The column I’ve highlighted in red reflects the percentage of people who test positive for the Wuhan Virus AND die from it (or from something else and the death is attributed to Wuhan anyway).

A big number (or perhaps we should say a ‘less small’ number), reflects a higher percentage of deaths for the infected population, while the smaller number…well, you get it.

The worst in the world at saving lives is Italy, and at the time of writing that number is 9%.  Nine percent of the people who contract the disease die.  Or, you might think it more appropriate to observe that 91% of people live. 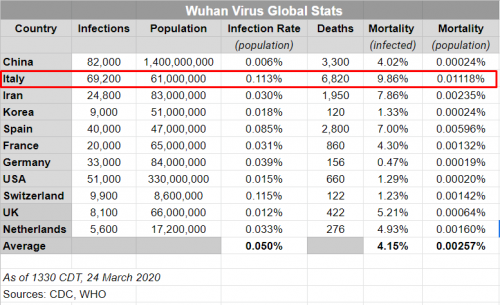 Think about that; IF you are so unfortunate as to live in Italy AND you get sick, you are 10 times more likely to live than to die.  Not bad odds, actually, especially given that you’re probably 70, smoke and drink and have diabetes and at least one other life-threatening condition already.

To put things in perspective, Germany is doing better than anyone else.  They have a mortality rate of 0.47%. 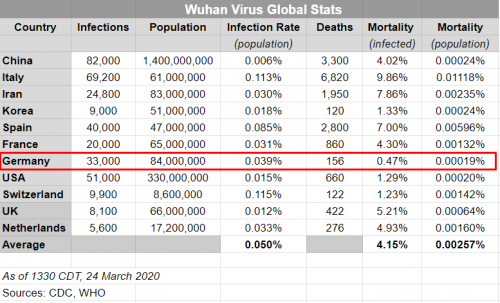 That’s one half of one percent of people who get the disease die.  Or seen through the eyes of the contrarian optimist, 99.5% of Germans who get the Wuhan survive.

So how are we doing here in the US?

A lot closer to the German experience than the Italian.  With more than 50,000 confirmed cases we have just a 1.3% mortality rate.  98.7% of those who come down with Wuhan will survive. 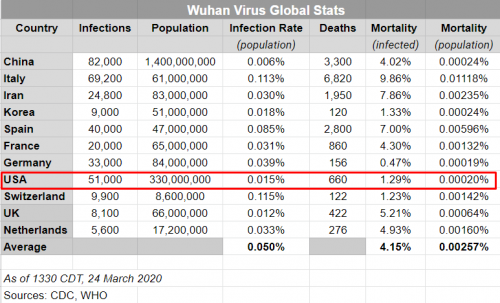 Now that we understand the ‘bottom line’, so to speak, naysayers to the ‘Death is the Most Important Metric’ ideology will claim that flattening the curve is a critical factor towards a low mortality rate.  Makes sense; if the hospitals are not overwhelmed with sick people, they’ll do a poor job of saving people.

And yet in Italy we’ve already shown that the nation’s hospitals are NOT overrun.  There may be a city or a region where hospitals are overwhelmed, but they DO have cars, helicopters and planes in Italy, and presumably know how to get from one hospital with too many patients to another hospital with available capacity.

Hmmm…maybe something else is going on.

Maybe Italy has a lot of really old, sick people who are going to die soon and any additional stress is too much.

Maybe Italy is reporting lots of flu-related deaths as caused by Coronavirus.

Something must be wrong if Italy is underperforming Iran and China.

Other naysayers may claim this approach demonstrates a disregard for human life, because an indiscriminate mass quarantine of all people (not just the old, sick, or vulnerable), will merely slow the virus but still end up killing people who otherwise could have been saved (the young and healthy who, against the odds, get sick and die).

This presumes that avoiding infection can be assured by a quarantine….of 330 million people.

This theory is problematic for many reasons.

For one, the incubation period of the virus may be as long as 28 days.  The virus may live on surfaces for as long as 17 days.  How long would the entire nation have to be quarantined to guarantee that the virus would not continue to spread after the quarantine?

Imagine my home with 10 children still at home and two adults.  If the virus moved through us one at a time (as the flu and strep have recently), and each of us experienced a 28 day incubation period before the next got infected, it would take 280 days before the virus would be done with us.

Keep in mind that we might not even have symptoms, and therefore could be unaware that we were carriers.

Will we have a nine month quarantine and still not be able to guarantee no one will be infected?

A 30 to 90 day quarantine won’t achieve this either.  Some of the ‘essential workers’ will inevitably be carriers, spreading it around to all the other essential workers.

Put another way; they cannot achieve what they claim as the goal.  The virus will spread.  Overtime we will develop some immunity to it.  Humanity will go on.  Well, those who haven’t succumbed to mental illness or suicide after losing their jobs, homes, health insurance and faith in the government to keep them safe rather than do them harm.

Related:  US Deaths Far Below Others

Critique 1) As I have previously mentioned to you, I do think the total number of infected and deaths are several orders of magnitude higher in China (as evidenced by what I’ve been told by some contacts plus pictures/videos of death numbers and also the data I’ve seen with the reduced number in telecom subscribers across the country). That said, I don’t think it meaningfully changes the conclusion of your article.

I agree the numbers in China are likely unreliable, but until I have something we consider reliable to work with, all we can do is just leave posted what we have here. As you say…it does not seem to change the conclusion.

Critique 2) Something that I think should be addressed and which would strengthen your conclusions considerably is the amount of testing done in each country. My understanding of the data I’ve looked at is that, generally speaking, there is an inverse relationship between the number of tests administered and the CFR.

Yes, I agree that more testing would reduce the mortality rate. But the obsession over the metric hides other costs and problems; 1) doctors offices are flooded with people demanding to be tested. 2) Internal peace of soul is lost because people assume they are infected (and sick) when all they have are allergies. 3) Panic grows over the difficulty intesting every man woman and child. 4) Social division grows as people learn about the rich and powerful being tested while they have not (and probably don’t need to). The whole thing is, largely, a farce. If you can’t breathe, if you have a 100.5 fever, go to the hospital. You will be tested there.

Critique 3) I think the lower rates of cases in general in Japan, South Korea, Singapore, and Taiwan need to be paid more attention to because they produce more evidence to suggest it will not necessarily infect 70% of the population.

I think the lower rates of cases in general in Japan, South Korea, Singapore, and Taiwan need to be paid more attention to because they produce more evidence to suggest it will not necessarily infect 70% of the population.  I think there are some cultures where their personal and cultural habits are so different than ours that it’s difficult to assume similar experiences. The best comparison I know is the Princess Diamond situation; 48% of passengers got infected. 10% of those got seriously sick. The mortality rate was an age-adjusted 1.3%…very close to what we’re seeing nationally.

Have you looked at the numbers of presumed deaths that will be caused by the quarantine? This is one of the most powerful things in my mind because people don’t recognize the death toll that will occur from the economic crisis we are creating.

I’ve glanced at it and I believe the numbers will exceed deaths caused by the Wuhan but I haven’t had the chance to build a model I can defend.