But, but…It’s Doubling Every Three Days!

Observers lacking successful experience with analyzing data breathlessly exclaim that the Wuhan Virus is spreading like no contagion ever before.  Gov. Cuomo used such a declaration to scare the nation with the promise that cases and deaths were doubling every three days.

The CDC’s own data showed that to be a lie.  In the most densely populated hotzone of the Wuhan (whether those are Wuhan deaths is highly disputed), the number of cases was doubling every five to seven days, and has already slowed down. 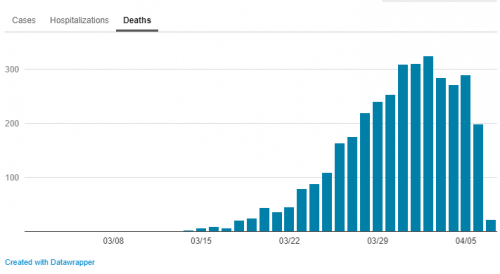 As you can already see, the chart is conforming very closely to the well-known bell curve phenomenon.  As Dr. Farr proved more than a century ago, the behavior of epidemics CAN be predicted, which is why I was able to estimate 25-30k deaths a month ago while ‘experts’ were predicting 2 million lost.  Read more about Dr. Farr’s work here.

One thought on “ But, but…It’s Doubling Every Three Days! ”